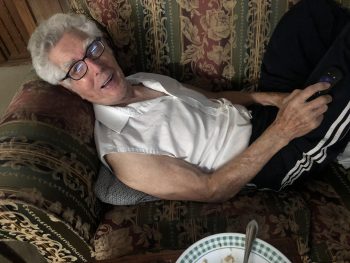 My name is Samuel Hayes—no middle name.  I was lucky to get two names being born in the 1920’s during the depression.  My parents were Thomas and Florence Hayes, lowly shop owners in Liverpool, England.

My earliest memory was playing with my bother, John, outside my uncle’s house just off Netherfield Road in Liverpool.  John later died at Netherfield Hospital of pneumonia.  I was too young to feel the hurt, but oh, how it must have hurt my parent and older siblings!  My older siblings were Tommy, Jean,  and May.

My next memory was being taken home from elementary school by my sister, May, two years older than I.  We attended the same school, Netherfield Road Public School in Liverpool.

Later I went to Andfield Road School.  We had a woman teacher because the men had to go to war.  Her name was Mrs. Price.

One day we were going to a school game at a football field a couple miles away. We were walking two by two.  Our school had school uniforms that had a special tie.  I asked my friend “What do ships do when they come into port?” and he said, “What?”  I put my finger under his tie and flipped it up into his face and said, “Tie up.”  Mrs. Price considered that inappropriate and sent us back to school as a punishment.  So we didn’t get to play football at the field that day.

Instead of going directly back to school, we decided to go home for a cup of tea since we had plenty of time.  He went to his house; I went to my house.  I don’t remember what we told our mothers!   Having that tea break got us to school quite late.  We reported to the Headmaster, Mr. Eaves, who asked where we had been so long.  Our story was unacceptable!

Mr. Eaves decided to punish us with a bamboo cane, which was about a six-foot long.   He took us to a private classroom to execute the punishment, two strokes with the cane on the palm of each hand.  Before going in to get our punishment, we pulled a hair out of our heads and placed it on the palm of our hands which we thought would kill the pain.  That was a myth!

I was the first victim.  It really hurt but not too bad.  My friend, however, moved his hand so the cane missed and hit the leg of the Headmaster, which made him very angry.  “Hold your hand out, Son” is what he would say.  He moved his hand again so the Headmaster missed again.  After the two strokes were administered, the Headmaster took revenge by hitting my friend on the legs on his way out of the classroom.   He hip-hopped out of that room as fast as he could.  I know that must have really hurt.  The Headmaster was a good guy; he was just doing what he was supposed to do.  He was an injured veteran from World War One.

ABOUT ME Hello. To various folks I am Neat’nee, Mom, Grandma Neta, Gramma, Aunt Neta, Aunt Noni, Aunt Neno, and Aunt Neto (lots of varieties from little nieces and nephews). To some I’m more like “Didn’t you used to be my teacher?” or “Don’t I know you from someplace?” To you, perhaps, I am a Fellow Blogger. Not “fellow” like a male or a guy, but “fellow” like a companion or an adventurer. I would choose to be Grandma Blogger, and have you pull up a chair, my website before you, while I tell you of some days of yore. I have experienced life much differently than most of you. It was and is a good life. I hope to share nuggets of appreciation for those who have gone before me and those who come after me. By necessity you are among those who come after me and I will tell you of those who came before. Once upon a time in a little house on a prairie - oops, change that lest I commit plagiarism - and change that “house on the prairie” to “dugout on the prairie.” So my story begins...
View all posts by oneta hayes →
This entry was posted in corporal punishment, English childhood, family, Hayes family, Sam's Story, Uncategorized and tagged corporal punishment, English childhood, evacuation, Hayes family, Sam's Story, Wales, WW 2. Bookmark the permalink.