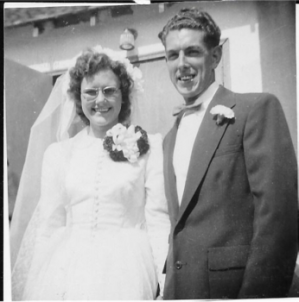 So, here I am injecting myself into Sam’s Story!  I wasn’t intending to do a part 7, but I didn’t want to leave Sammy fending for himself in that big old New York City.  No, he didn’t stay there long.  Took a train to Mississippi where his family had settled in.

There he met a preacher who recommended that he go to a small Bible school in Oklahoma City, spring  of 1951.

That summer someone suggested I leave my home in Baca County, Colorado, and go to that little Bible school in OKC.   So in the fall of 1951, I did just that.

In September there was that dashing English gentlemen in the social room one foot on the floor and the other on the stove.  I wasn’t much impressed, of course: however,  I do remember it to this day.

For three or four – or more – months, or was it weeks, I remained rather aloof as he:

Drew pictures for me in history class.

Went with me for fundraising.  He didn’t laugh at me when I told a group that we were going to do a certain thing in “Feptember.”

Stirred my peanut butter and syrup.

Blew dandelion puffs at me.

Left me a chocolate malt at the foot of the stairs.

Whistled down the hall.

Sat by me in study hall.

But I was beginning to fall under his spell when he:

Carried one end of a twig while I carried the other end.  We had a “no touch” rule in our Bible school.  I do confess to putting my hand over his while he was holding the steering wheel.  Our chaperone was quite liberal.

Tossed snowballs in my direction.  How could he miss so often?

Spelled out “I Love You” in sign language when we sat in church.

Cleared his throat in a secret code while we were in class.

Took a lecture from the dean because he stood with his arms open wide while I pretended I was going to jump into them.  The dean said that did not look proper.

Sat with me on the pig sty.

After about six months, he kissed me.  Broke the rules.  I was flustered.  When he said, “Will you marry me?”  I was thinking about the no touch rule, and I thought he said “Are you mad at me?”  I said, “Why, no, Sammy.”  (This Colorado girl was a bit confused because of his British accent  – no r sound!)  Suddenly my brain got straightened out and I quickly asked for a little time to think it over.

A couple of days later, he said I had had a little time, and I said, “Yes.”

ABOUT ME Hello. To various folks I am Neat’nee, Mom, Grandma Neta, Gramma, Aunt Neta, Aunt Noni, Aunt Neno, and Aunt Neto (lots of varieties from little nieces and nephews). To some I’m more like “Didn’t you used to be my teacher?” or “Don’t I know you from someplace?” To you, perhaps, I am a Fellow Blogger. Not “fellow” like a male or a guy, but “fellow” like a companion or an adventurer. I would choose to be Grandma Blogger, and have you pull up a chair, my website before you, while I tell you of some days of yore. I have experienced life much differently than most of you. It was and is a good life. I hope to share nuggets of appreciation for those who have gone before me and those who come after me. By necessity you are among those who come after me and I will tell you of those who came before. Once upon a time in a little house on a prairie - oops, change that lest I commit plagiarism - and change that “house on the prairie” to “dugout on the prairie.” So my story begins...
View all posts by oneta hayes →
This entry was posted in English childhood, Hayes family, marriage, me, Sam's Story, Uncategorized and tagged Hayes family, marriage, me, Sam's Story, Southwestern Bible College. Bookmark the permalink.